The Best Snowmobile Oil on the Market

So you’re a snow enthusiast and you can’t wait to get out in the fresh powder?  We have the deal for you. Before you load up the snowmobiles on the trailer and head for the hills, you need to add  Amsoil® Interceptor Synthetic 2-Stroke Oil into the tank.

Snowmobiles are meant to ridden hard.  Rarely do you just idle them around on the snow.  Getting them started with the centrifugal clutch means you give it throttle, and it’s usually all of it.  When you’re up to speed you tend to relax a little unless you’re in a race. Then it’s all go and little slow.

The Amsoil® Interceptor Synthetic 2-Stroke Oil is formulated to work in all 2-stroke snowmobiles including Ski-Doo, Arctic Cat, and Polaris.  It’s simple and easy to use as a replacement for your current oil or you can use a 50:1 mix as a replacement. This oil is a detergent formula so that it keeps your injectors or carburetor and engine running clean and smooth to prevent valves sticking under hard use.  It’s compatible with all 2-stroke oils, and it has a low smoke formula to prevent the white cloud you typically see with other oils as they drive you away with a heavy cough. The oil also includes these great properties:

If you’ve been a snowmobile enthusiast for a long time you know that snowmobiles have been using leaner gas and oil mixtures over the years to clean up the emissions.  That also means less protection for your engine, more heat, and more friction inside the engine. None of those are good for long-term durability. The Interceptor oil uses high molecular weight components with a high flash point that won’t burn up in the combustion cycle.  They survive well and help lubricate the engine components rather than vaporizing and head out the exhaust without helping the engine.

Detergents in an oil doesn’t sound right.  How can an oil clean while it protects? AMSOIL’s Interceptor oil has additives that won’t add to the mess in the combustion chamber.  They won’t burn, and they help keep the valves, piston ring, and spark plug clean while the engine is running. The harder you run the engine, the more they clean.  That’s crazy, isn’t it?

Hearing about the oil isn’t enough.  You want to know how well it really works.  We understand that. Look at these two real-world case studies and you’ll understand why you need the Interceptor oil from your local AMSOIL dealer:

While snowmobiles have been the main topic, Amsoil® Interceptor 2-Stroke Oil is meant for all 2-stroke engines.  That means snow blowers, lawn and garden equipment, and motorcycles too. If it uses 2-stroke oil, the Interceptor oil will do well in that application.  The snow machines are a great test bed to prove how well it works, and that means you’ll have great success with it too. You can mix it with standard conventional oil, but limit how much you mix.  It’s best to run out the conventional oil mixture before adding in the AMSOIL 50:1 gas-to-oil mixture. You should notice a difference when making the switch.

Be sure to contact your local AMSOIL dealer for the Interceptor oil, and look at the other AMSOIL products that can keep your 2-stroke, 4-stroke, and metal parts lubricated for maximum durability.  Every synthetic oil change will maximize the life of your machines. For more information, to buy AMSOIL or to become an Amsoil Dealer please visit www.buygreatoil.com. 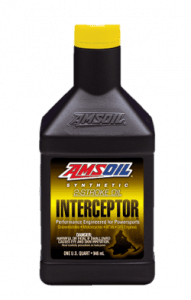